OVERVIEW OF THE FIVE ELEMENTS

The five elements (or five phases) — wu xing — is one of the core philosophies of ancient Chinese (and particularly Daoist) thought.

Based on observations of nature, this model is a description of change over time and the interaction between different states of being.

These don’t refer to physical substances, but phases of a cycle or ‘energies’ of a particular nature.

Each element resonates with a wide range of other phenomena, such as seasons, climates, colours, sounds, odours, emotions, flavours, directions and many more.

Note that these things are not necessarily discrete categories, but we categorise them to better define and understand our complex environment. For example, colours are on a spectrum of visible light. We know when we’re in the middle of summer, or that a colour is definitely green, but it can be hard to say where the boundaries are.

Similarly, all systems and theories (including five element theory) are necessary simplifications that help us understand the complexities of nature. This is why you can have multiple different theoretical systems working concurrently (e.g. yin/yang theory and five element theory, or Western medicine/Chinese medicine, etc). They are like different types of maps of the same terrain.

IDENTIFYING ELEMENTS THAT ARE OUT OF BALANCE

Five element theory is one of the diagnostic frameworks we use in Chinese medicine. Elements can become imbalanced, becoming either excessive or deficient. We may inherit a certain kind of imbalance, or our formative experiences can create an imbalance in one or more elements. In Five Element Acupuncture, people are categorised according to the element that seems to be most out of balance. In this system, the key indicators of the main element are:

Another useful indicator can be how we feel when interacting with a person, and the kinds of needs, issues and difficulties that come up often for them. Here are some examples:

WATER: needing to be safe, trusting, drive, being reassured, excitation in danger

THE CYCLES OF THE FIVE ELEMENTS

There are two main cycles through which the five elements interact: 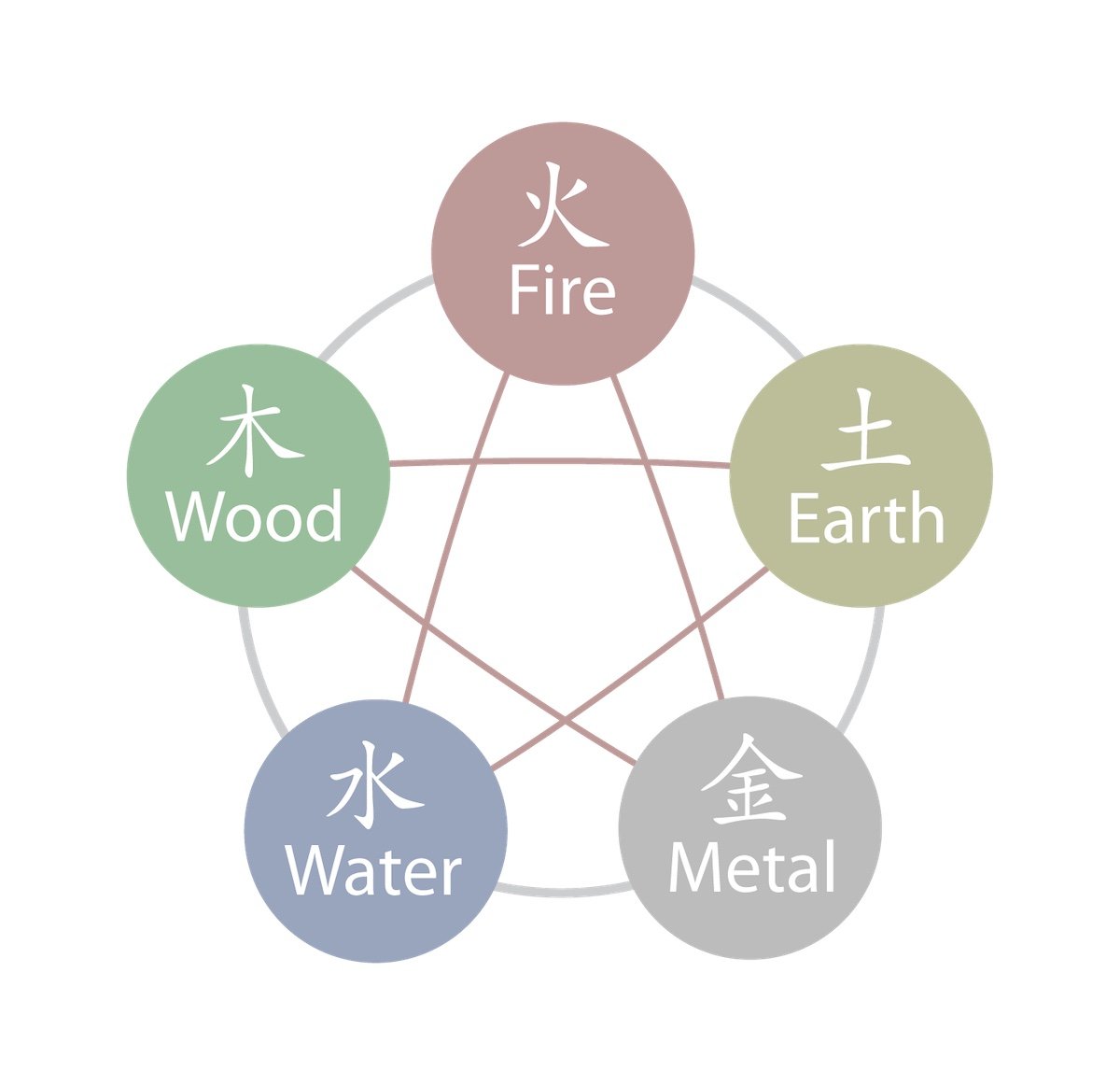 This is the grey circle connecting each element to the next in the cycle.

We will also find that a deficiency in one element often leads to problems with the next element in the cycle. For example, if Metal is deficient, we may see symptoms of Kidney (Water) deficiency. If we treat or strengthen the Water, we won’t deal with the underlying problem of Metal deficiency.

This is the red pentagonal lines in the middle of the diagram. Each element controls the element two further along in the cycle:

For example: If Wood is excessive, we can control it by strengthening Metal. We may also find that it is a Metal deficiency that is causing the Wood to become excessive in the first place. (In this case, we might also strengthen the Earth to help increase Metal which will control Wood).

You will notice that through these cycles, each element is linked to every other element.

Each element has an associated movement that we can use in our qigong practice to strengthen a deficient element or calm an overactive one.

By practising the Wu Xing Qigong set, we are ‘Harmonising the Five Movements’. You can watch the exercises in the video below.