Qi means lots of different things in different contexts, so it’s quite difficult to define.

In modern science, energy is ‘the ability to do work’. It can take many forms but is basically how things change and move.

The idea in traditional Chinese thought is actually not too different. Qi can take many different forms but it is that which creates change and movement. In Chinese Medicine we actually list 6 functions of qi:

So anything that does any of these things in the body (or in the world) can be described as a kind of qi.

The movement of blood around the body to oxygenate the tissues is a kind of qi. The nutrition in our food is a kind of qi. Electrical impulses through the nervous system, hormones, the immune system – these are all things that we could describe as different types or movements of qi.

There’s also the idea that each of us has a physical body, and a mind/emotions. Between these two is our Qi, connecting the two together.

Events that affect the physical body (such as injury or illness, or even posture) can affect the movement of qi in the body. For example, an injury causes inflammation, which stops qi from moving freely through an area (in this case you can think of qi as the movement of lymph and other fluids, nerve impulses and so on). This stagnation of qi causes the experience of pain and tends to lead to frustration and irritability.

This is an example of a physical problem moving through the qi layer to affect the mind and emotions. The process can work the other way too.

For example, the emotion of worry is said to ‘knot the qi’ and particularly affects the digestive system. This can in turn manifest in digestive problems. 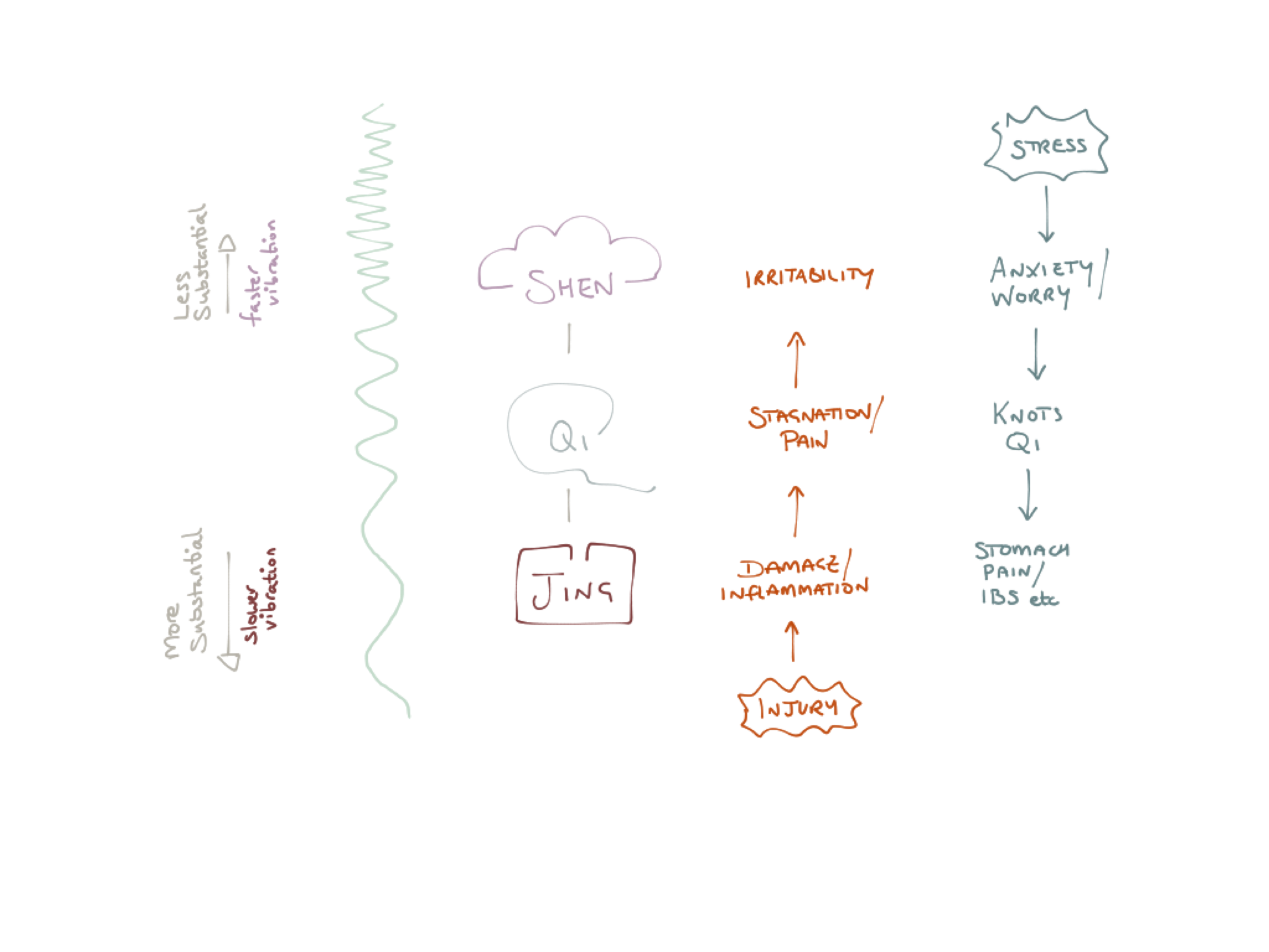 We can see and feel the movement of qi in ourselves and others, if we pay attention.

When someone is angry, we can see their qi rise up to their head as they become red in the face and their body raises upwards.

If we stand in a relaxed posture and gradually release tension and allow our centre of gravity to sink as we bend our knees slightly, we can feel qi dropping downwards in the body. It doesn’t matter exactly what is moving or changing, if we feel a sinking sensation, we can say that the qi is sinking.

Understanding the various directions of movement of qi, and understanding how to make our qi flow in different directions is one of the key skills of the practice of Qigong.

So Qigong is about developing mastery of our energy.

There are various systems and models used for understanding the movement of qi. The most important of these are:

The 5 element system (also known as the 5 phases) describes how things change from one state to another. Each of the five elements has a direction of movement associated with it: Wood rises upwards, Fire expands outwards, Earth splits, Metal contracts inwards and Water sinks downwards.

At its heart, Chinese medicine is about identifying in which direction things have moved out of balance, and then helping to correct the imbalance. In Qigong, one of the fundamental skills is to harmonise the qi — this is done through a series of movements to ensure the qi flows properly in each direction.

Richard Agnew writes about health and work, drawing on behavioural science and the martial, medical and spiritual traditions of East Asia.He is an acupuncturist specialising in treating pain, injury and stress-related problems, and has practiced martial arts and qigong for many years.