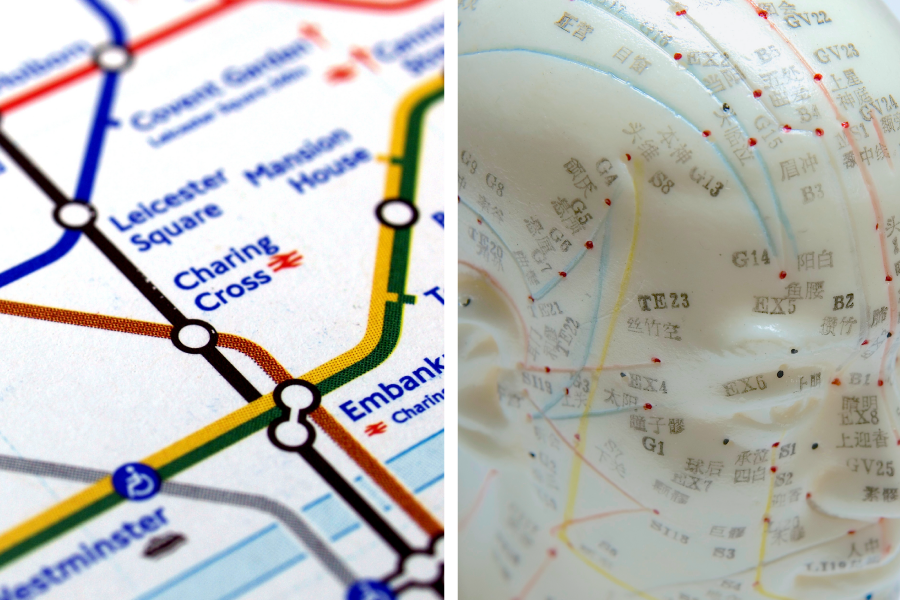 Think of conventional medicine as being like an Ordnance Survey map. It is an extremely detailed study of the physical landscape. By contrast, Chinese medicine is more like the tube map. It is more schematic, not so literal, and is more interested in the movement and relationship between different places than their exact physical location.

Both maps are accurate representations of the same landscape, but from different perspectives and serving different functions. An Ordnance Survey map is really detailed and useful, but it’s not much help if you want to know how to get from Paddington to Leicester Square on the tube. This is why I think we struggle to explain how acupuncture works in the context of conventional medicine.

While biomedical science has a concept of ‘energy’ (think calories and ATP), this is a little different from the idea of Qi in Chinese thought. Qi is thought of as existing between the level of the physical body and the mind/consciousness. It connects the two, and is the pathway by which the body affects the mind and vice versa. While we cannot see it (with some rare exceptions), it can definitely be felt and experienced through qigong practice. Read more about the nature of Qi here.

I like the metaphor of the tube map, because it can help explain the nature of the acupuncture channels and energy system of the body.

People often say that ‘Qi flows around the body through pathways called meridians’, but this can be somewhat misleading. Since most people are only aware of the large meridians you may see on acupuncture charts and models, they think this means that Qi only flows along these pathways. Actually, the meridian system is much more complex than most people think, and Qi flows throughout (and beyond) the entire body, moving in all directions. There are places where more qi flows in the same direction, and these form the ‘primary meridians’ that you’ll see on models and charts.

Imagine all the people waking around London, all walking in different directions on their journey to work or home or wherever. In some places, like on large roads, train lines and the Underground, lots of people are travelling in one direction at a time. This is the same as the movement of energy, and is also how the circulatory and nervous systems are organised, with tiny capillaries and nerves supplying each cell but collecting into much larger blood vessels or nerves in central areas of the body.

The Underground system must be constantly moving people from place to place in order to avoid congestion and delays. If a station is closed, this creates congestion in the area. If an entire tube line is closed, there’s havoc across the capital. So it is with the energy system. When energy can’t move freely through a channel (whether because of tight muscles, injury or some more complex internal condition), the stagnation that ensues causes pain. If entire channels are affected, or joints such as the shoulder are closed or blocked up, all sorts of problems can arise, not just causing pain but affecting the organs themselves. Good posture and correct alignment and stretching are encouraged in qigong because this will keep the joints and channels open and the Qi flowing freely.

Richard Agnew writes about health and work, drawing on behavioural science and the martial, medical and spiritual traditions of East Asia.He is an acupuncturist specialising in treating pain, injury and stress-related problems, and has practiced martial arts and qigong for many years.